The flag, presented later, was flown over the United States Capitol on December 13, 1978, as attested by a framed certificate from the capitol architect which is displayed on the east wall of the solarium.

Flagpole and Marker at Gunnison Courthouse
The original wooden flagpole, together with a war service flag, was dedicated on Mother’s Day, May 12, 1918. The flag, flown beneath the Stars and Stripes, was a cross of 164 blue stars on a white background, representing Gunnison men who had entered military service. The flag and a framed document with a listing of those men are in the possession of Gunnison Valley Chapter, NSDAR, and are displayed yearly. The wooden flagpole was replaced with the present metal pole in 1931. 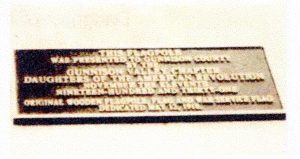 Post Office Marker
A centennial historical marker was placed honoring 16 postmasters from 1876 to 1976. The marker commemorates when the post office first opened for business on October 2, 1876. The building, a log cabin, was removed to the museum grounds and restored several years before the 1976 centennial dedication of the marker.

Rainbow Route Marker
The original marker was placed by the Gunnison Valley Chapter at the summit of old Monarch Pass, probably in 1917. In the late 1930s, the sign was found on the pass and preserved by Margaret Flick. The sign was badly rusted and damaged. James Stell restored the sign in 1978, and it was placed on the grounds of the Pioneer Museum in 1986.

The Rainbow Route was a part of the National Auto Road System, the first automobile road across the continent. It went from Pueblo to Salt Lake City by way of Canon City, Royal Gorge, Parkdale, Cotopaxi, and Salida, connecting there with the Midland Trail and the Lincoln Highway. From Salida, the Ranibow Route branched, the main branch going to Parlin via Monarch Pass, the other to Parlin via Cochetopa Pass. From Parlin it proceeded to Gunnison, Sapinero, Cimarron, and Montrose, where it turned south to Ridgway; it then continued to Placerville, down the San Miguel River to Norwood, and on to Grand Junction and Salt Lake City.

According to a local Gunnison newspaper account, the section of the road from Canon City to Salida took 100 men working night and day more than two years to complete. Convicts from the state prison were employed in building the road. The cost was around $150,000. This section was opened on September 21, 1915.

According to Mrs. Ruth Smith Stell, a past regent of Gunnison Valley Chapter, NSDAR, the actual work of building the road was under the personal supervision of the county commissioners. Gunnison and Montrose counties imposed a tax of $4 per person to pay for the work.

Many of the road signs used to mark the Rainbow Route were placed by Gunnison Valley Chapter,  with donations from at least one Denver chapter. The signs were placed on trees and telephone poles.

Ute Council Tree Marker
This tree was the site of many councils between the Ute Indians and the white man between 1857 and 1882. The Ute Council Tree was marked by Captain John Gunnison Chapter in memory of Chief Ouray and Chipeta. 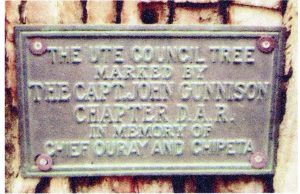 We invite and welcome you to attend any of the Gunnison Valley Chapter, NSDAR, meetings or events and meet our Daughters. If you would like to attend a chapter meeting or event or to learn more, please email our chapter using our Contact Us form.

Join us on the first Saturday of each month at the free coffee social for Gunnison Valley military veterans from 9:00 a.m. until 11:00 a.m.

The content contained herein does not necessarily represent the position of the NSDAR. Hyperlinks to other sites are not the responsibility of the NSDAR, the state organizations, or individual DAR chapters. Membership inquiries can be made using our Contact Us form. This website was last updated on October 24, 2021, by the webmaster.